Instagram – the only social network which rewards creativity with more followers – is my latest iPhone app addiction and may soon become essential for news junkies.

Where else could you get a photographic insight into presidential debate just minutes before it went LIVE to air.

Twitter, you say? Ah, but Instagram makes the photos the medium, not the caption, and you can search by tags, places or even GPS.

This enables me to instantly see who else and what else is being posted at a certain location, be in the Vatican City as the pope appears, an earthquake in Indonesia or at a protest in Time Square. Of course, it works locally too as more people join up and tag posts with your favourite cafe, park or club.

As I write this, #OccupyWallStreet has 6612 photos under that tag. Even #occupysydney has 130 (not including those added by me)

It’s also becoming a nice way to tap into the US presidential campaign. 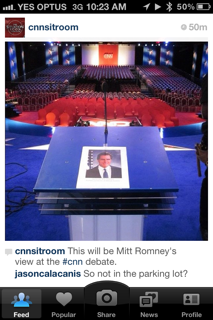 There is quality content here, and the feed keeps getting bigger, especially from US TV networks hitching a ride on this new photo-sharing app.

@TodayShow is leading the way starting hashtags for each musical act to join their concert series.

@Starbucks is offering deals if you follow their posted pics.

And despite a few big-name signups, Instagram is still largely under the radar.

Perhaps it’s because the media hasn’t been mentioning it on air. There have been no security breaches, and no epic milestones of users signed up (although it is pushing 7million users – not bad for just 4 employees) and that’d always a good time to join.

You know, before it was popular.

Part of the app’s appeal is that it makes real people the most popular when their skill has wide appeal. Meet the Top 15 Photographers – most of whom are relative nobodies until Instagram.

That said, here are a few familiar names and faces you will know if you sign up…

Posted in Apps, How To, Social Media, Tech

Keep in mind they have just announced they are set to adopt a seventh child. 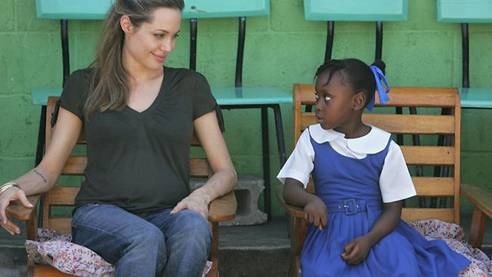 No Nespresso, by George

A friend recently asked me what I think of Nespresso. It
was a great idea, asking me, an opinionated coffee addict with an
interest in marketing and happy to turn my steam wand on any
conniving multinational!

It's all so simple. It's also landfill.

That
said, no, I do not like Nespresso. And here’s why. The concept of
Nespresso, Nestle’s foray into the domestic coffee machine market,
is to give people a perfect cup every time by pre-determining your
entire experience. For a brand to go to this level of sanitising is
absurd and seeks to create a kind of culture akin to the Soda
Stream (you always knew who had one and if you were, as Ii was, a
have-not). Now, I’m no slow-foodie but when I buy coffee it’s whole
beans, by the kilo, and I like being able to meet the roaster or
check the roasting date. If I became more educated I might also
notice the country of origin. At the same time, while cafes in
Sydney are all posting hessian coffee bean bags on their walls to
show they’re connected to the source, Nestle is taking the farmer,
the wholesaler, the grinder totally out of the equation and
vacuum-packing your daily hit without even a hint of personal
interference. Simplicity replaces engagement. It’s the MAC of
coffee, and nearly everyone else is a PC. For my money, this is absurd
and a brilliant exploitation of the consumer desire to have it all
with minimum effort and with the least time taken. It’s cynical. An
end-to-end controlled coffee experience aimed at the well-off and
by a company who have nearly managed, with all their Hollywood
firepower (see ad below) to dissociate themselves from Blend 37, no, I mean Blend 43.
Three possible
reasons you would buy this insipid device:

The worst of it is that once you buy the (rather pricey) machine
you are tied into buying their coffee
only at their prices, meaning they can
charge whatever they want and you have to cough it up. A guy I work
with – who falls easily into category 2 above – has bought a
Nespresso machine and tried to defend their cosy pricing regime.

“I just go in and get five
boxes (of capsules) and I have enough to last me ages!” It’s all
pre-ground, pre-roasted, pre-fabricated. And there are different
beans and blends, but guess what that means; with a Nespresso
machine, your separation from the coffee production process is now
so complete that Nestle’s system now controls not where and when
and how you buy your coffee. It’s all very clever. When you buy
more expensive capsules you feel you are getting their best
beans… but are you? You can’t check anything. It could have been
roasted months ago. But, like most purchasers, my friend now buys a
cheaper type of pod because what seemed reasonable at first is soon
dropped in favour of a more affordable cost-per-cup. The problem
is, “the cheapest pods taste like sh-t!’, he tells me. So, he is
forced into buying a higher cost pod to get a reasonable flavour
coffee. The store sells the machine telling buyers they can enjoy
coffee for as low as $0.50 per cup. But my friend says to drink
something bearable it’s now it’s closer to $1 a cup. And he has no
control over any part of the process. According to a Wikipedia
reference, Nespresso’s cost per serving is up to three
times higher than that of alternative brewing methods. What a
treat. Sign me up, George!

My review of The Social Network

This film should really have left me feeling better about something. Even if it were just liking the director or writer more than I already did. Did, in the past tense.

But I had no such luck when I saw The Social Network last night. I found the film flaccid, indulgent and it confirmed Aaron Sorkin has a bag of chips on his shoulder.

The film was an uninteresting tale, written well enough that you nearly didn’t notice how dry the subject matter or acting was, and all designed to attract a ready-made audience of 500million registered users.

The machine that makes movies just combined a few skilled tradesmen and spat out a palatable, marketable 90 minutes of slick pap.

Then, Sorkin appeared at the Golden Globes and said something that made my stomach literally churn…

“‘And I want to thank all the female nominees tonight for helping demonstrate to my young daughter that elite is not a bad word, it’s an aspirational one. Honey, look around, smart girls have more fun, and you’re one of them.'”

As this blog (http://criticalnarrative.blogspot.com/2011/01/hollywoods-aaron-sorkin-elite-is-not.html) says,

Hmm. I wonder what Sorkin thinks of the word “pretentious”?