Social networks need filtering. If this issue is not sorted soon, places like Twitter, Facebook and Pinterest could eventually become ghost-towns. (It could happen. Do you really think you’ll be posting this often in the same places in five or ten years?)

Imagine if 80% of posts in your feed were the gold you want to respond to, the ones you’ll laugh at, the posts you actually want to read. Of course, we still need at least 20% to be slightly irrelevant so distract/potentially inspire us.

That’s the well-filtered world we could be living in now, if we could just figure out who to follow, who to prioritise and how to manage it all.

We require simple, effective filtering to
lessen the burden of just maintaining what was once so enjoyable to engage with.

To this end, the idea of measuring clout – to show who are the most influential people on a social network – could be endlessly useful.

I’ve seen many stories about why Klout.com is feted as a measure of social capital. And it does seem a vaguely accurate marker – however easily manipulated.

But I have read other claims it’s based on a misnomer. After all, say the critics, “how do you define influence?”

Do you add anyone to your Twitter lists who you don’t respect? It takes longer than to follow someone, and you only look at it for a specific purpose, not while window-shopping on your general twitter feed.

I am on about 60 people’s lists, because I have little influence. (It’s ok. I don’t feel bad.)

Secondary to how many times you are listed, is who has you listed. Do they have many followers? Are they listed many times? This could also form a way for Twitter to select top posts. Currently, that algorithm seems hooked on a user’s number of retweets and follower numbers.

Mashable says that there’s a need to quantify someone’s ‘reach, relevance and resonance’ to measure their social influence accurately. (Read more of this dubious claim.) However, influence is dependent on subjective reasons too, like likeability – for example, Barack Obama is of much less influence to you if you are a Republican, or if you live in Iceland.

Just a quick note on this much ignored feature of Twitter. I love them as a bookmark, as something to retweet or reply to later… They have many uses. But… they’re UNPROTECTED.

I can look at your favourites, you can look at mine. This astounds me. Can you see my browser bookmarks? No. Yet, without even logging into Twitter , I can see that;

Why Google+’s grass is looking greener every day

Facebook gets away with a lot because we are just so used to it screwing up our privacy settings and it’s not the first company to share our info but at least we like using its service (unlike banks, for instance).

But two experiences I had today – yes, In just one day – have me very offside.

I didn’t really pay attention to this until I saw it pointed out that Facebook has accessed my mobile phone – without asking.

A list of all our friends’ and associates’ cell phones is now online. This has been possible before but we have never had an organisation go and pilfer it unrequested. 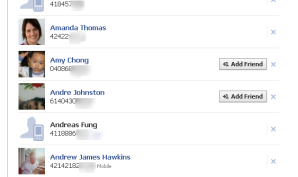 The dilemma we should all have with this is that not just our own privacy has been breached but our friends’ and family’s too.

If my Facebook account is ever hacked – and let’s be honest, most of us use our passwords in more than one place and it doesn’t look like this “jhsdy8643kh4k4” – then the hacker now has access to not just my personal details but all my friend’s. There is no White Pages for mobile numbers, so all these phone numbers could immediately be sold to spammers and telemarketers and so on.

And oh look.. since I started writing this, an Iain Wood in Newcstle, UK, was found to have hacked the bank accounts of his friends and neighbours using their Facebook accounts.

“He would make friends with people on Facebook and have their usernames he would try it on the bank websites, on the basis people use the same passwords. (Read more – Fraudster used Facebook to hack bank accounts – Telegraph http://j.mp/o8Qkr8 )

2. Photo tagging – by corporations
Secondly, I am no fan of Facebook photo-tagging but brand using it to ensnare new fans is a painful new development.

Yesterday I received copious emails that people were commenting on a Ekka photo.

I was baffled. I barely know what Ekka is. (Ekka is a country-comes-to-the-city festival in Brisbane.)

Turns out that Ekka, via its Facebook page, was encouraging people to tag themselves AND THEIR FRIENDS on a photo they put up to enter a competition.

Sorting this out took about as long as throwing out junk mail I get on my letter box. But for that, I can put up a sticker NO JUNK MAIL. For my emails I have a spam filter. For telemarketers the government provided donotcall.gov.au

But I am inside Facebook’s forcefield.

I didn’t give them much. I don’t even use my own name. I post to limited groups. But it doesn’t matter.

As they court brands and advertisers, they can bypass my futile efforts and even use my ‘Friends’ to get to me.

It is awfully close to the last straw for me.

Google+ may be no better in the long run, but right now, Google’s grass is looking much greener.