I love the Blue Mountains. It’s the closest thing I have to a second home. I get misty-eyed driving down its long streets on ridge-tops and going to garage sales on foggy mornings. Both sets of in-laws live there, I still run into people I know wherever I go. I regularly stay in Blaxland or Wentworth Falls and have twice done house-sitting to get away from the city. It’s an escape, plus, it is where I enjoyed most of my childhood.

It’s been 15 years since the audacious Winmalee High Class of 1995 set off into a world with many more ethnic types and much less concrete than we had seen for six years.

Which brings me to my first troubling point – it’s no less white than it used to be.

In our class, we perpetuated a myth that our school was ‘the most racially pure’ in the state of New South Wales. I always thought that any small school in far west NSW would win that contest because we did have the occasional student of Asian or Aboriginal or Indian extraction. 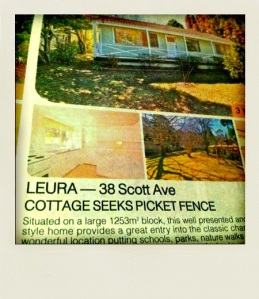 It's not a picket fence this house needs.

But the lovable towns of Springwood (where I lived) , Blaxland , Glenbrook and Leura all paint a picture of an Australia largely untouched by anyone who isn’t Anglo or at least an Anglophile. Sure, there’s an occasional Thai restaurant and the Chinese eateries (the kind that have been there since 1981 that still serve deep fried dim-sims worthy of any good food court) but where are the deeper changes that would occur if the culture was more mixed?

I’m thinking of seeing more non-Anglos on council, discussion of cultural issues in the paper beyond how can we stop a new servo setting up, ads for community events that are for Korean Food Fests or Tongan church services. Currently, the Gazette – the local paper of which I am a big fan – is filled with people whinging about big-chain supermarkets, complaints of too many trucks, plus ads for knitting workshops or for Alcoholics Anonymous.

And that brings me to my second disappointment. I feel as if the place is not coming up in the world, it’s possibly going down. This observation – and that’s all it is – could come from a few things…

Let’s be honest, I didn’t totally fit in to the landscape of the Blue Mountains, like some do. I wanted to be a rock climber but didn’t have the stamina nor the tolerance for sore, cold fingers. (It is the perfect pastime when you live in an area of cliffs, lookouts and bushwalks.) I didn’t like to drink, which was how many friends chose to spend their time. But I was social. I just wanted to hang out. My options? The pub or the pub, and that has barely changed.

I am now an inner-west snob. I love my cafes and I refuse to go somewhere that doesn’t understand ambience is just as important as a good coffee. Springwood, for its part, has one place known for great coffee and it’s a take-away in an ugly-as-heck arcade. It makes most of its money off real estate staff. The other cafes appear run by middle-aged women who think a throw rug and a few steel chairs is what will keep people buying more focaccia. Focaccia! Blaxland has this chronic. Glenbrook is doing slightly better (see photo).

So what can be done? I need ideas if I am going to sit and whine on a blog.

Where I grew up, the people were friendly and, thankfully, they still are. This should be the real impression left on visitors to the Blue Mountains and one the residents are proud of. Yet with many aspects of amenity already lost, from dingy parks to bored, boozing teens congregating in neglected town centres, the Blue Mountains may soon have very little to lay claim to… except that it is one of the most racially pure areas in the state.

And even that one’s a myth.