Here are the best Twitter tools that I use for tweeting and tracking of the multiple accounts I manage.

At one stage I operated eight accounts at once for various TV shows (@SunriseOn7, @MorningshowOn7, @SundayNightOn7,@7NewsSydney,@7Newsroom,@Vote7News), assorted TV personalities* and my own account (as well as one alter-ego!).

I am happy to concede this is too much Twitter for one person to manage – but man, it does force you to get efficient when you’re tweeting.

@Sunriseon7 now has around 50,000 followers and continues to add a few hundred each week. I aim to make it a destination not only promoting what’s on Sunrise but a useful stream of entertaining content, local and international news as well as breaking news.

To keep on top of breaking news that will be retweeted and gain you many new followers who want to read things first, you need to have the best mobile twitter setup available.

So I tested many, many twitter clients and this is what I have wittled it all down to..

I have put them in order of how much I use them. Aren’t I helpful?

1. TWEETBOT
I am such a fan of this relatively new iPhone Twitter app (client). It’s very intuitive, has many hidden features you are surprised by after a week or so, and nothing is smoother when using multiple accounts. I have paid for about ten twitter apps. This was easily the most worthwhile. It’s highly readable, fast and flexible. Plus, it never crashes.

2. TWEETDECK
Explaining twitter to the uneducated is best done by showing people filtered feeds, i find. But that’s just the start of how Tweetdeck simplifies the twittersphere.

For browsing of tweets including tracking breaking news and running multiple hashtag feeds, nothing beats the multi-column,multi-account interface of Tweetdeck.

If at all possible, get a separate monitor and leave it running. Alerts show you the latest tweets allowing you to spot replies and retweet at a glance. Plus, it’s got scheduling so you can keep the convo going when you are otherwise having a life.

Lately, I do admit, the app is running awfully slow.

3. BIT.LY shortcuts
Stuff the t.co URL shortener Twitter is trying to force us into using, bit.ly offers traffic analysis, real time updates, desktop alerts and browser shortcuts that saves me about an hour a day. Try the sidebar bookmarklet and the Chrome Extension to see what I mean. (I especially like the hover tool that shows how many clicks on a link just by hovering over any bit.ly link anywhere, and the right-click function “copy and save shortened link to clipboard”). Love it.

See also my blog on explaining all  my Chrome (browser) extensions

4. SNAPBIRD
Search as far back as you what in anyone’s timeline. Can be a little touchy sometimes but generally I find what I want.

6. TWITTERSTATS
Get into this to see just how you have been tweeting, who you retweet the most, at what time of day and how your tweeting has changed over time.

Why is this useful? Well, imagine if you could see whose emails you forward the most or that you now send twice as many emails every day than you used to. Tracking your habits can reveal the changing face of how you are marketing your brand but also how that reflects the audience.

I know that for Sunrise, I have found that I get more response from people in the first half of the day and people are less likely to respond or retweet anything between 12 noon and 5 or 6pm. The stats show that after that, people lighten up again, so i now target those hours.

7. TWEETSTATS
A little less useful for brand tweeters but interesting nonetheless. Spits out nice graphs (for free) including your own twitter word cloud. Intriguing.

8. HOOTSUITE
I have trained several people at Channnel 7 in how to use this web app. It runs through the website which pleases the IT team as nothing suspicious need be installed.

Hootsuite’s best feature has always been scheduling, which it achieves better than anyone else. (Tweetdeck’s scheduling remains buggy and often sends my tweets now not later.)

The layout is disconcerting as it has two navigation bars, columns, tabs within columns and layers. But if you can get past that, it is a timesaver with features like saving your frequent searches e,g, #quake or “breaking news”, multiple users, columns and it offers some good features to drill down on users. Rather amazing what they have done with HTML5.

*Why did I tweet for TV personalities? When some TV stars get started, I ease them into Twitter to avoid any major faux pas going public. Some even email me their comments which I then tweet (quaint!). They are all now independent tweeps, which i suppose makes me an empty nester.

For the record, here are the Twitter iPhone apps I no longer use – but i keep on the phone to watch  how they improve with updates. 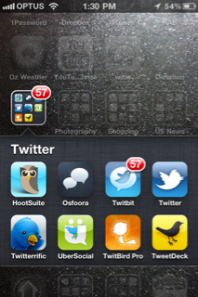 Have any great tools I haven’t listed?