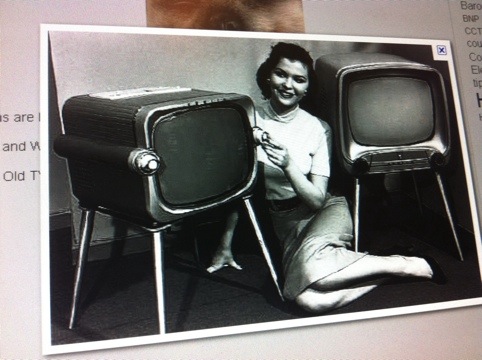 My recent experience of buying a new TV should have delivered me immense satisfaction and loads of testosterone as I made the biggest decision a married male can make on his own.

But somehow, my purchase of a Smart TV” left me feeling much dumber for it.

I work in TV but live most of my life online so in my humble opinion, my new “connected TV” should allow me to do both;

I want to tweet while I watch a show. I want to read my Facebook but keep streaming the news. I want also want to be able to browse the web using a keyboard and trackpad and it doesn’t seem ridiculous to me to expect a TV to be easily able to stream videos on my much smaller-screened Macbook.

But no. For the ten years since plasma TVs came out – and I have been biding my time – the best TV makers have developed is a pretty pixelated digital picture that is thinner and uses less energy.

Why are we way back here, deciding on small variations of nothingness when even the most sophisticated TV will still only deliver me a dodgy web browsing experience.

(Massive icons, a keypad on the remote with arrows to move the cursor around like a first generation Blackberry. And on most, you enter a URL using numbers like your first NOKIA in 1995!)

After visiting two or three stores, it became obvious that the coolest, $5000 LED-LCD TV won’t yet let me flick between websites, track tweets while I watch a show in the other part of the screen, post on Facebook while I continue watching my favourite show… you know, do what my notebook computer does.

When I went to university and completed my Applied Science in Information Studies, I knew the internet was going to change everything. But that’s all I knew. And the lecturers, who were clouded by years of teaching how information sharing worked the old way,had only just begun accepting essays via email.

TVs are now the librarians of old. The rusty Citroens choking up the info highway, delivering info as they always did and resisting new developments that threaten its mainstay.

Looks too me like televisions are an overheated area of glitzy marketing with pretty minimal delivery. There’s lots of jargon, stickers and selling points but I am getting a TV which does little more than the mournful, cumbersome CRT I now have sitting on my living room floor like an orphaned elephant. Yes, a white elephant.

Lucky for me, one clever thing my TV can do is turn itself off if it detects no movement in the room for thirty minutes.

And so far, to Sony’s credit, this has only occurred twice during my favourite show.

Unbelievable.
Now that I have finally received the WIFI dongle (which had to be transferred from another store) I find that the Sony WIDGETS work on my TV model and one is for Twitter!

This means I CAN have a twitter feed in the right of screen as the show – form any source – plays out on the left of screen. Joy of joys. And my apologies to Sony.

The interface is limited but hey, it’s all a step toward real social TV. Using Sony’s rather good iPhone app ‘Media Remote’ you can type and navigate the screen as good as one might hope.