I have just concluded five years inside the bewildering world of breakfast television, a place where secrets are held tight, where inhibitions are lost, reputations are built and an astounding amount of work is drawn from a group of extremely talented people.

I’m the first person to say that this blog is just a way to process my experiences. It’s not seeking to blow the lid on some outrageous work culture. (That’s not to say that the Sunrise lifestyle isn’t outrageous. It is mildly insane. And if it weren’t so ridiculous in both its personalities and pace, it’s unlikely I would’ve stayed for five years – twice as long as I’ve spent in any previous job).

Inside the Sunrise bubble, you’ve got to like the frantic pace. In fact, you’d better fall for it and wish your weekends had the same wham-bam. Otherwise, your nay-saying and drawn looks will soon stand out like a typo in a headline.

Each day at Sunrise starts as soon as the show finishes. For me, the production meetings (a half hour conference call) were the most hilarious part of my day. Whether I was running for the train or doing ablutions in my pyjamas, I never missed one.  The jokes come fast, the wit is often as crude as it is sharp, and somewhere in between people are pitching ideas and a show takes shape. Staff in the office already could attend the meeting in person, and they’d often leave the room crying with laughter. How many jobs can start you off on that note each day?

For most staff, the hours are long. For me, the hours were also flexible, allowing me to work around the clock and my family which worked well to help the show lead in the social media sphere.

Working at Sunrise bled into my regular life in other ways. At least once a week I had the question ‘What are Kochie and Mel really like?’ It came up on Facebook, at cafes, at dinner parties, even at the doctor’s. Unfortunately for this blog, the truth is that they are just like on TV. Mel is really into family. Kochie is really into finance. Both are professional and efficient. Last time I saw them, Mel asked about my kids and Kochie said, “Do you realise ten per cent of household electricity bills are due to appliances left on standby? Ten per cent!”

The personalities of those behind the camera are a little more extreme. Imagine the most extroverted person you went to school with, and combine them with the most creative and driven manager you have had in your career and you are approaching the kind of person it takes to deliver three hours of live television every day.

(As a quick sidenote.. few people seem to understand the importance of this — Sunrise represents about a quarter of the television programming for each day (that is, inside waking hours). So it’s worth a huge amount, it’s taken very seriously at some upper executive level and it takes an enormous amount of effort to get right.)

I believe that part of the reason the show works is because people there care greatly about the minutiae. You may have noticed the length of segments but have you considered the size or speed of the ticker scrolling along the screen, the length of banter between segments, or the order of the cities cycling through the weather on the screen. (I once received about ten complaints via Twitter when these cities got out of order, proving some viewers do notice.)

Producers are trained to think about even the smallest things. What’s in the background behind your talent? What headline works best if someone has the TV turned down? Someone is thinking about the number of seconds any sponsor’s logo appears. Other conversations revolve around the suitability of guests to hosts, couches vs. desks, whether we throw to the break with a tease, banter, a chat or just go straight to the break?

Producers consider such points for every show. Then you watch it play out… and… it’s seamless. If it’s not, producers all definitely hear about it – but only briefly. There’s no time to dwell.

If you’re not in TV land and you don’t care for any of the breakfast TV presenters, I still suggest you watch it one day and ponder how, less than 24 hours earlier, the program may have had no rundown, no script, and, perhaps not even a single interviewee lined up. It should not be possible.

A recent video I made on my iPhone made light of the difference between the new HBO drama The Newsroom and the production team of Sunrise. This video was obviously in-jest and the silent shots of the Sunrise team at work belie the times it can turn furious. The banter is less witty and it takes place more often on email, which, I suppose, wouldn’t make a great show about a show.

As in most TV units, some days are quiet while some are frantic – and it’s these ones which can turn rather silly. People swear a lot and make obscene jokes but no one gets offended. Again ,there’s simply no time.

The way to cope with such pressure in breakfast TV is to let loose – have a good yell, burn off stress being a gym junkie or binge on junk food (this was usually me), break into a public song or dance (usually the management), or dress up as a cow… that sort of thing.

There was one time former EP Adam Boland threw his Blackberry across his small office during a production meeting. It wasn’t intentional, as I recall, but the mistake became suddenly more serious when the phone flew out a small gap between the glass wall and ceiling then descended down a level, landing among the 7 News desks. (“Damn! Missed!”, someone said.)

The response of Sunrise producers, typically, was bellows of laughter.

It is as if a mild eccentricity filters down to the troops, perhaps from the VERY top. Sure, you’re spending heaps of money chasing great TV and super ratings, but shouldn’t working inside the magic of TV be enjoyable? 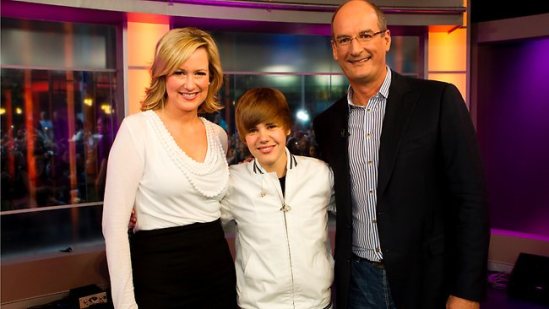 When police canceled Justin Bieber’s concert in 2010 due to safety concerns, Adam called me at 4 in the morning.

He was completely calm as he told me to tweet the thousands of crazed and crying teenage girls that there would be no concert.

There was no suggestion of a back-up plan. This was the wildest moment in my time at Sunrise. Twitter, teenage obsession and a frustrated hormonal climax came together in a genuine social media storm, and all before the actual sunrise.

The emotion soon turned very real as literally thousands of girls marched aggressively toward the Sunrise studio where the glass is thick … but only so thick.

Adam then pulled a Bieber-sized rabbit out of his hat to salvage the PR disaster, somehow ushering the star safely into the studio where he performed behind the glass.

I will never know if it was always plan B but at 4am, then again at 6am, there was still no mention of a plan B, not even to staff. Yet, by 9am, the months of planning, enormous build up and costs had completely paid off.

And it wasn’t just that 5,000 screaming girls were going home happy. Professionalism, with just enough secrecy, had carried the show, the day.

This must be how Sunrise stays on top year after year. I’m not entirely sure. I guess I wasn’t there long enough to find out all the secrets.