Twitter, when used effectively, is an extremely quick way to find and share information. The nightly TV news – God bless them – can’t stop reporting what’s happening in Twitterland, because more often than not, it’s where things happen, or happen first.

Yet here we are a few years into the revolution and I continue to find people who want to understand Twitter, some even want to be part of it, but they haven’t joined up. From what I can tell, these happy but misguided people fall into three categories; sceptical or ignorant or both.

So, here is my concise contribution to resolving that.

(I won’t spend any time here going into why or what you would tweet. I believe that once people have spent any time using Twitter, these questions appear as silly as the idea we would all sign up just to tweet what we’re eating.)
————-

When getting started on Twitter, there are three important things to know.

To send a tweet to someone in particular, put their @username at the start of the tweet.

When you ‘mention’ someone this way, this appears on their Twitter page – or their ‘timeline’ – but not on the timeline of anybody else. (The exception to this is if someone is following both of you.)

It means that if you and I have a conversation, as if we were using text messages, most people won’t need to read our stream of comments, and would never come across it, unless they went looking for it. Available but not entirely public.

So, don’t be afraid to have a conversation or send people tweets, as these are generally unseen by your followers.

Twitter also offers the option of sending messages visible to everybody. So if you have something of interest to say, you don’t need to put anybody’s @username at the start of your tweet. Just gi ahead and broadcast. 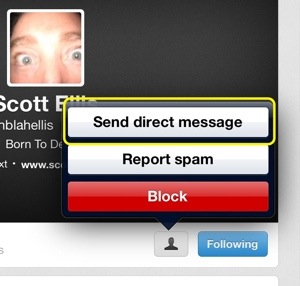 Direct Messages
The other way to tweet is direct messaging. This is a private message sent via Twitter between two people following each other. It is the only way to keep tweets private. While you can’t prevent the recipient of your direct message from sharing it more widely, this rarely happens. For me, this is the main way Twitter is replacing email. But more on that another time.

Retweets
‘RTs’ are the main way people re-share content. A retweet has less gravitas than a forwarded email. It’s best to imagine an RT as a forwarded email sent with a subject line FYI (For Your Information). That said, choose careful what you retweet to avoid it becoming spammy. Some of Australia’s most prolific tweeters retweet up to fifty tweets per day. Because I could, I tweeted them to let them know they were overdoing it. Sure, they ignored me, but I’d got it off my chest.(Don’t actually know if they read my whingey tweet. But still.)

The major concern people have with retweets is the fear that you are endorsing whatever is in the original tweet. This, to me, is a moot point for individuals but a serious issue for brands.

As a person, I can post a photo of graffiti without anyone suspecting I had painted it. Some who see my tweet may think I like the graffiti. Others who know me better will realise it’s just me highlighting how our city is going to rack and ruin. I don’t particularly mind either way but it’s not the best way to tell people what you think is appropriate or funny. It IS a great way to show people something you think others need to see.

For brands, the danger of being seen to condone various points of view must be taken much more seriously. That’s one reason it is safer to retweet with context.

Retweets with Added Value
I believe re-tweets are much more valuable if you take a moment to add a comment, a thought or some context to the content of your re-tweet. Where possible, I include a salient fact I gained from the article, or the statistic that surprised me most. Sometimes I even grab a quote that summarises the main thrust of the article.

Sure, it’s not as quick as hitting re-tweet, but it does help explain to people why you’re sharing what you’re sharing, and solves the problem of whether a re-tweet constitutes endorsement.

Now, go get tweeting, and tweet me your complaints or questions. I promise to read them. I may even retweet them.